He feeds his artistic practice with the daily experience of the semantic and linguistic miracles generated by cultural otherness and his share of misunderstandings. Through the medium of ceramics and with a lot of humor, he confronts traditions and knowledge. In his work, porcelain is both the medium and the object of an experimental kitchen turned towards the creation of objects involving foreign bodies im- mersed in incongruous environments, enigmatic, sometimes hostile but always playful.

Since the end of his studies at the School of Fine Arts in Limoges in 2014, his work has been presented in several exhibitions. In 2017, his work was presented in the collective exhibition “Métamorphose de l’ordinaire” at the gallery Les filles du Calvaire in Paris. From 2015 to 2017, he has directed several solo exhibitions in different European cities: Paris, Marseille, and the Edmond Gallery in Berlin with “BURNED ANGEL”. In 2016, he is part of the “KAO EXPORT LTD” exhi- bition at the Adrien Dubouché National Museum in Limoges, France. In 2014 his work was exhibited at the “1320” col- lective exhibition in the JCI exhibition space in Jingdezhen, China. In 2018, he exhibited at the Contemporary Ceramic Center of La Borne after a residency of several months. 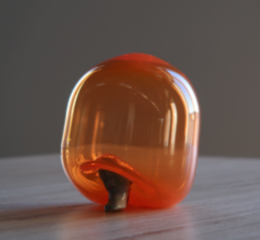