In search of a new visual language, Japanese artist Yuya Suzuki responds to the environment around him: minimalist amorphous shapes, semi-symmetric patterns and bright, blazing colours function like fragments or syllables of an unintelligible code. When viewed as series or as room-filling installation, Suzuki’s works unfold into a linguistic landscape that feels strangely familiar, yet cleverly escapes definitive meaning. Each image is created from a part of an actual city-scape, but the level of abstraction varies: from motifs that closely resemble the original to heavily abstracted patterns. His “archegraph studies” — a term he coined in 2016—  are visual texts that could also be described as an abstract syntax or musical pattern. Suzuki’s notes proliferate endlessly, defying a harmonious melody. 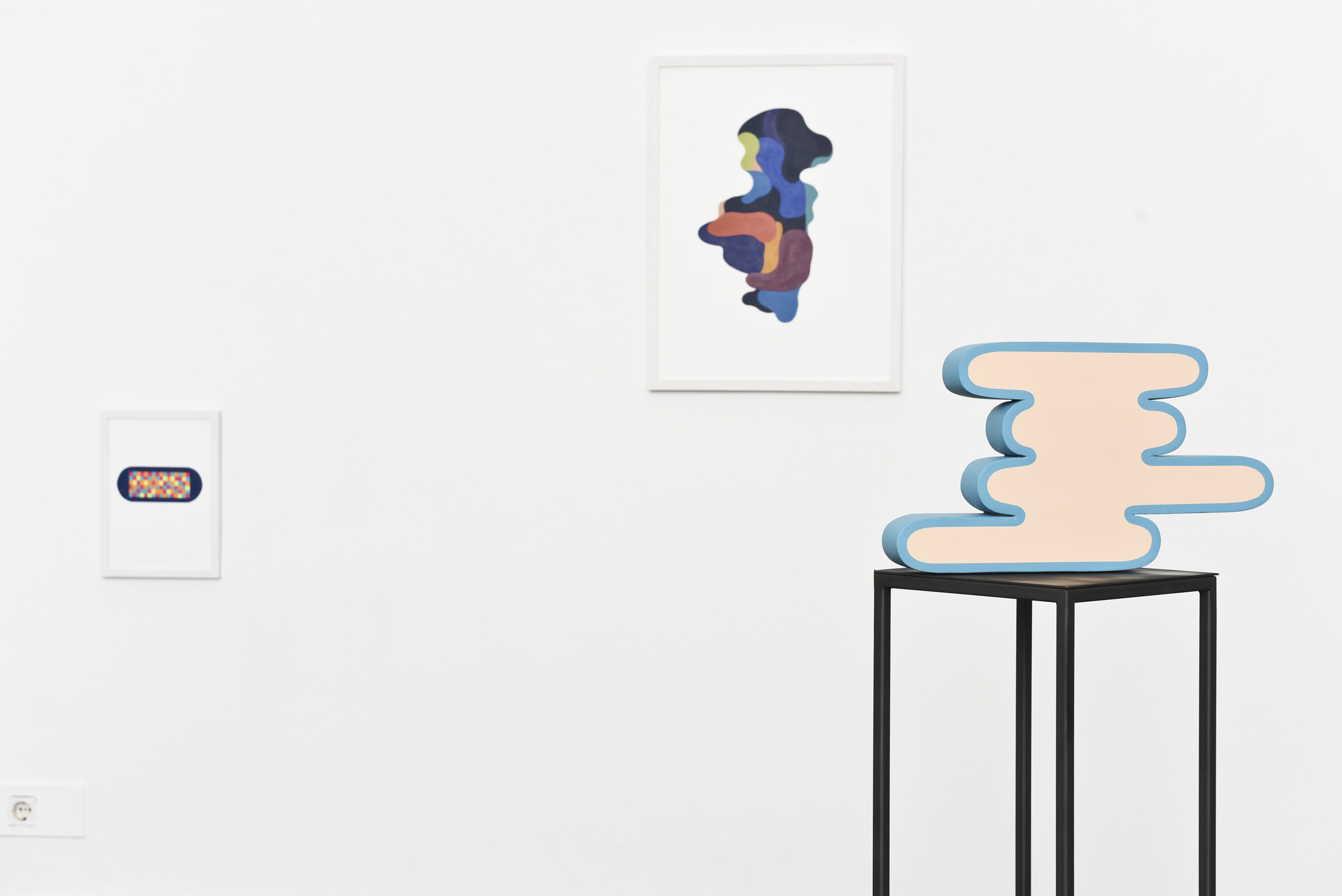 Suzuki creates drawings, paintings and sculptures that are linked to our unconscious perception of contemporary urban life. He is a flaneur. Travelling the world, Suzuki wanders through cities he visits and collects impressions of mundane objects and elements that easily escape our attention. Suzuki uses these neglected objects to create his own visual vocabulary. Even though his work is based on his subjective perception, he aims to create a language that is universal at the same time. City-dwellers all over the world will be able to recognise certain elements: may these be associations to skyscrapers, bridges, windows and trees or smaller banal objects like a stack of boxes, plastic curtains or traffic lights — for each viewer there will be different motifs to identify and connect to. Suzuki’s post-minimal abstractions — he regards Sol Lewitt as an inspiring influence — provide just enough imaginative space to remain accessible to any audience. The term “arche” in his title “Archegraph Study” refers to the Greek word for “origin”, whereas the word “graph” translates as “symbol” or “image”. Suzuki’s “original images” therefore depict a minimal archetypal language, shared by humans worldwide. By abstracting elements that are familiar across cultures, he taps into the collective unconscious of urban life.

While in the streets, Suzuki collects his impressions by taking photographs. Back in his studio, he pencils an outline of each visual fragment and transforms it into a finely drawn abstracted symbol. He then uses colour-pencils or acrylic gouache for colour. Some of his motifs are outright flat, simple and two-dimensional, whereas others are more detailed and contain a three-dimensional perspective. His working process is swift and spontaneous. “When choosing the colours for my drawings, I try not to think too much. It is a very intuitive, quick approach.” He uses a heavy paper that in itself has an almost haptic structure and absorbs the paint, leaving a dense, velvety finish. His precise colour-pencil drawings are just as buoyant and intense. While there are recurring elements in each of his Archegraph Studies— as of now, there are individual series for Tainan, Nagoya, Sapporo, Beijing and Berlin — every study is clearly different, assembling different colour-schemes and abstract urban shapes. Each series captures a city in a unique way, yet also tells a common story of urban spaces everywhere. As Suzuki travels across the world, he takes the viewer to seemingly familiar places, all the while projecting a futuristic vision of indefinite possibilities.