Hua’s installation brings you to a world that is not restricted to a timeline, a world where time frames overlap. Challenging the traditional material functionality, using nature and artificial means, together her sculptures hold structure of a narrative story. Meat comes in the shape of a hook - hooks of flesh. Chains that are a symbol of restraint now show fragility. Everything is metaphysical. It is an uncanny dream that contradicts the existing physical world.

Hua’s exploration of perception continues in her first ice sculpture titled “A Bracelet”, where she tried to reinterpret the nature of chain as a mutable liquid. This attempt to translate the powerful symbolic industrial product into a large ice bracelet chain, transfigures visible matter by melting down 30 kilos of it during the course of a day. After making initial sketches and conducting various experiments with material such as glass and resin, she moved her work’s production to an ice sculpture workshop. There she worked together with the ice sculptor, creating four sets of one meter by one meter crystal clear ice bracelets.

While visibly focusing on profound material transformation and notions of authority, “A Bracelet” deals with the inextricable relationship between power and fear, the illusion of power and the memory of fear, but also with notions of mass production and consumption. Effectively re-making an industrial product by adopting much temporary industrial means, “A Bracelet” metaphorically represents a constraint product of industrial revolution and also its ephemeral notion of time.

In the subsequent performance piece ‘Give Chains a Chance’, the artists will re-invent an after life in various forms for the remains of the ice chain. This performance is centred around Hua’s ice sculpture titled A Bracelet, where she reinterpreted the nature of the ice chain as a mutable liquid.The ice chain is as much as a symbol of suppression as an exquisite ornament, with implications of vanity and pleasure. In an attempt to further its versatile potential, we took the remains from the ice chain on a journey and gave it an after life in various forms. Battersea Park in London was chosen as the site. Battersea is not only rising as an area attracting the art world, but also an area that is undergoing dramatic changes. The area’s shifting and transforming identity is similar to that ice chain.

Ambiguous and surreal, this meticulously created object reflects both the most ordinary everyday situation and the strangest of fiction...”A Necklace” as a impressive enlarged gradients of pink chain is the unexpected encounter of quality-ism and quantity-ism.

A threatening atmosphere posed by the hanging necklace as an assumption of today’s individualism. 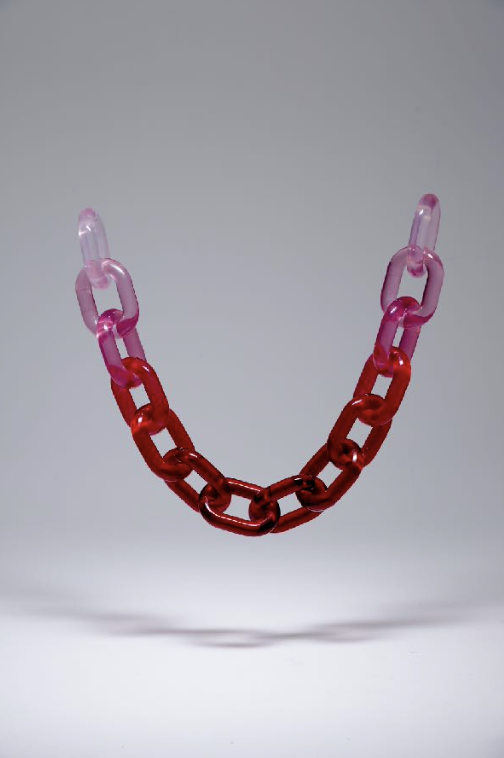